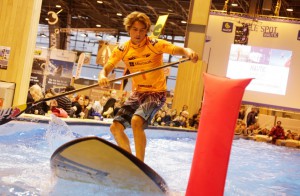 In the early hours of this Sunday morning, the River Seine became THE spot to be, with an impressive array of boardsport champions hitting the water, among a total of 400 competitors, in a bid to secure a win in the fifth Nautic SUP Paris Crossing (Stand Up Paddle).

Kai Lenny, Antoine Albeau and the cream of the professional racers pulled out all the stops to win this first race across the capital. The same was true of the second round, which was played out in the aisles of the boat show, where the boardsport bug spread like wildfire through the Paris venue, to the great delight of thrillseekers and fans of the latest technologies.

Full house for the Nautic SUP Paris Crossing
As scheduled, at 08:00am this morning, the 400 racers competing in the Nautic SUP Paris Crossing set off on their mission to devour the Seine: a unique spectacle and an extraordinary competition, kindly immortalised by Toshiba, who kitted out a number of today’s riders with small waterproof cameras, including the hawaiian star Kai Lenny from Team Naish. Over the eleven-kilometre course (13.5 for the Pros, who completed an additional tour of Ile Saint-Louis), the separation between the 36 front runners amounted to just 10 minutes, which testifies to the intensity of the battle, where every paddle stroke counted. With the support of the Services de Navigation de la Seine, the River Police and volunteers from the SNSM rescue services, the competitors became embroiled in an unforgettable battle, resulting in a remarkable time of 1 hour and 8 minutes for Titouan Puyo, the ISA world champion 2014 (long distance), who secured the top spot among the Pros. Also of note was the fine performance by Virginie Louppe, who was part of the HandiSUP disabled ranking and finished 24th woman. Once they made it to the warmth of the Microsoft campus, the competitors quickly hit the road to the boat show at Porte de Versailles. And though endurance was an essential quality if you wanted to shine beneath the Eiffel Tower this morning, brute strength and dexterity were what really made the difference under the Nautic’s spotlights this afternoon, where the public where out in force to cheer them on and lap up the hilarity.

The podiums for the various categories after two races
In the Leisure category, Reza Nasiri (Italy) took the title ahead of Ole Schwarz (Germany) and Jean Letourneur (France). Antoine Albeau was 8th (France).

Among the Women’s Leisure category, Amandine Chazot (France) won the event ahead of Véronique Decroocq (France) and Virginie Samson (France).

The Solo Maître Coq switches format
The Solo Maître Coq 2015, which will be held from 18 to 26 April, was presented this morning on the Pays de la Loire stand in the presence of Denis Hugues, the new race director, as well as a number of skippers from the Figaro Bénéteau class, including Gildas Morvan, Claire Pruvost and Vincent Biarnès. On this grand occasion, the organisers announced that the event will enjoy a change of character as it has just made the switch from a publicity event status to that of a race, the points for which will count towards the French Elite Solo Offshore Racing Championship.

The Naval College presents the 14th edition of its Grand Prix
This Sunday 7 December, at the Nautic Paris Boat Show, Rear Admiral Philippe Hello, Commandant and Director of the Brest Naval College and President of the Grand Prix Ecole Navale association and Jean-Pierre Champion, President of the French Sailing Federation, presented the 14th edition of the Grand Prix de l’Ecole Navale to the press and visitors to the show. The event is due to take place from Thursday 14 to Sunday 17 May 2015 in Brest’s harbour and the bays of Crozon-Morgat and Camaret.

Presentation of the French stage of the Volvo Ocean Race
On behalf of Lorient Grand Large, at 17:30pm on the Nautic Stage, Marc Specque, Communications Director for SCA France and Bruno Dubois, Team Manager of the Dongfeng Race Team, presented the French stage of the Volvo Ocean Race (a crewed round the world race with stopovers), which will be held from 9 to 16 June 2015. On the programme: the arrival and departure of the boats in the harbour, as well as a sumptuous In-Port race in the Coureaux de Groix, which is sure to be the highlight of this stopover. This was confirmed by Charles Caudrelier, skipper of the Chinese boat, as well as Sam Davies, skipper of the only all-female boat in the event, during today’s live radio link-up with the race. It’s worth noting that right now, the VOR65 boats are some 1,200 miles from the finish of leg two, which will be decided in Abu Dhabi, most likely in the latter half of this coming week.

With Jimmy Cornell, from the Canaries to the West Indies
An accomplished sailor and a successful author, Jimmy Cornell has devoured some 200,000km in all the oceans of the globe. To his credit he has three circumnavigations and a vast number of voyages to Antarctica, Alaska and Spitzberg. With the help of his books, among which we include the bestseller, World Cruising Routes, thousands of yachties have been able to complete their dream cruise. This afternoon, at the Nautic, he invited the general public to go on a voyage with him, explaining to them the concept of the offshore cruising rally, the ARC, of which he is the founder.

The meteoric rise of dinghy sailing
The days of just slipping along in its purest sense have gone. We must now make way for these hybrid catamarans carried along by their highly revolutionary foils, which enable us to sail a few dozen centimetres above the water. Initiated last year by the Flying Phantom, which boasts a number of evolutions this year, general public access to this new type of craft, capable of powering along at over 30 knots, is becoming increasingly open with the presentation of three new catamarans equipped with foils. Among them we have the much-awaited Nacra F20 Carbon, as well as the Stunt S.9 from Forward Sailing, a solo catamaran equipped with a unique mainsail and able to fly in upward of 8 knots of breeze. Finally, we have the prototype from Whisper designed by the much-celebrated Solent University of Southampton, the definitive carbon version of which will be built from a single mould and will be reminiscent of a Batmobile… A comic look, but a real concept !

For all those who prefer to stay in contact with the liquid element, there are a whole host of new additions on the scene, starting with the new 13-foot Hobie Cat, the T1. A craft whose prototype is debuting in Paris, she features slender lines and a 100% watertight construction that has been remodelled by the world’s historic leader of the beach catamaran. For solo sailing on a single hull, the RS Aero has enjoyed real commercial success and is a very high performance alternative to the traditional Laser.

Among the kayaks, we are back with Hobie, which has revamped the Island with a well-designed hiking trimaran that features greater volume, an integrated centreboard, a larger sail and a more comfortable seat… It is very much the great explorer.

Bic is really on the pace too with its kayak, Java: a new craft to paddle in double or solo configuration.

Blue, white and red innovations
The major innovation at Bic Sport revolves around its new range of ecological Stand Up Paddle boards, Earth, whose design is geared around minimising its environmental impact: it’s flax fibre replaces glass fibre, Paulownia wood replaces PVC foam and cork replaces EVA foam. Though there is not yet an equivalent ecological substitute for epoxy resins, Bic has proven its desire to take a new eco-friendly stance in terms of technology.

Among the sailing dinghies, the major new feature isn’t exactly a dinghy as the Albatros is none other than a ballasted dinghy. Designed by the famous architect Jean-Marie Finot, the idea is to get every generation out on the water so it is easy to access and safe, without sacrificing anything to enjoyment: a sophisticated and ultra-sporty outline and hull beneath the waterline, with a ballasted centreboard enabling its crew to do some acrobatics out on the wire whilst preventing any risk of capsize! “She’s built from vinylester and carbon on the deck, with a hull made of glass/vinylester for the structure. Added to that, the hull beneath the waterline is designed like a catamaran, the hulls of which join back up at the bow to form a single bow/twin stern boat. Slightly heeled, (7 to 10°) only half the hull is in the water. The Albatros goes into overdrive in upward of a Force 2 breeze. She planes along heeled over! To have fun with the minimum risk of capsize, it was necessary to have a stable boat. To achieve that I made her very beamy (1.95m) with a very low centre of gravity thanks to a lifting (lead) ballasted centreboard weighing in at 34kg, which steers itself automatically. She needed a very light mast too. This is made of carbon and floats, which means the Albatros is self-righting.” 100% made in France, economical, easy to learn and high performance, the Albatros is a fine illustration of the untiring genius of the French marine industry.