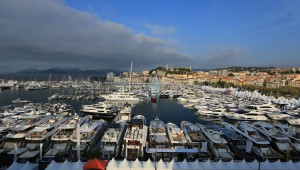 The Cannes Yachting Festival has once again been declared a resounding success, consolidating its position on the international yachting calendar. The 37th edition of the eminent event saw 550 boats displayed, alongside associated equipment, on the glittering bay of Cannes with close to 100 worldwide premieres unveiled to the public for the first time.

Range and Variety
The show offered more than 50,000 visitors the chance to see new motorboats, catamarans, sailing boats, RIBs and tenders ranging from 5m to 55m; it is this sheer range of models and sizes that stands the Cannes Yachting Festival apart from its competition.

The average size of the boats was 2% longer than last year, showing increased demand from customers for larger yachts.

In addition, visitors had the opportunity to explore a wide range of nautical products in the Equipment Village in the heart of the show.

Sea trials proved popular again this year, with 80% of boats able to leave port for a test drive, a crucial part of the selling process.

Increasingly International
The Cannes Yachting Festival confirmed its international appeal this year, with a 4% increase in international exhibitors from 2013, reaffirming the change of name. The show hosted 480 exhibitors, with almost two thirds coming from 34 countries outside of France.

The French Nautical Industries Federation and Reed Expositions France wish to thank the City of Cannes, the Nice-Côte d’Azur Chamber of Commerce and Industry, Port Pierre Canto and their teams for their cooperation, as well as the other partners of the show: Musto, Ethimo, Lise Charmel, Ladurée, Azur Hélicoptère, Wajer & Wajer, Fenwick Tohatsu, AGL Marine and Sisso.