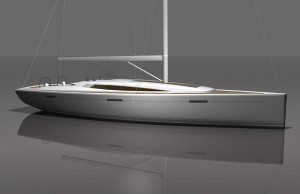 Following the market launch of the Dehler 38 during the last “boot” in Düsseldorf, Dehler is now introducing another new model. The first details of the new development Dehler 46 will be presented at the “boot 2014” in Düsseldorf. This boat is due to be completed in early summer 2014 and will round off the Dehler product range at the top.

A number of valuable details have been adopted from the successful Dehler 38, like the round and appealing shapes of the roof structure, the shape of the windows topped with an aluminium strip and the hull shape with steep and wide stern.

The Dehler 46 is offered in different expansion models, which enables the boat to be transformed from a comfortable tour version to a competitive race boat thanks to a wide range of options. The sporty attitude is underlined with a 2-spreader mast positioned on the keel, which can absorb the occurring loads optimally and distribute them over the entire bottom structure. The bottom structure is reinforced with carbon fibre, which achieves an extremely high rigidity. There is a large storage area in the bow, which can be accessed through a flush mounted porthole in the deck.

There is the option of a plotter pod at the helm station. The round forms of the cockpit coaming flow visually into each other, which achieves an ergonomic shape and offers additional seating with back support for the crew. The open stern of the cockpit can be closed with a bathing platform, with the further option of a bench, which also acts as a gangway.

The interior impresses with up to three generously sized cabins and two comfortable heads. The design is dominated by round, harmonious shapes, combined with modern accents, which create a homely atmosphere. The saloon is equipped with a large U-shaped sofa, a generously sized L-pantry and a navigation table.

Dehler is setting new trends once again with the new Dehler 46 and presents sophisticated detail solutions in line with the 50-year tradition of the brand – a key element of the success. The basic net price for introduction for boats ordered until 30th of June will start with 219,000,- Euro, after model year change on 1st July 2014 the price will be 229,000,- Euro net!
The first boat is due to be completed in July 2014.