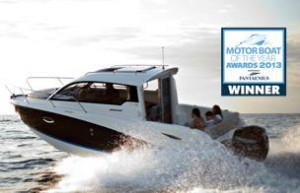 The Activ 705 Cruiser has won the 2013 Motor Boat of the Year Award at London. This is the third consecutive year that Quicksilver has won one of Europe’s top boat design awards.

The judges selected the Activ 705 Cruiser as the winner “because of its mix of fun handling, practical features and class-leading accommodation, Quicksilver¹s first cruiser from its all-conquering Activ range has delivered more knockout blows than a tornado full of boxing gloves. Following the award-winning Activ 645 Cabin, the Activ 705 Cruiser takes the popular design and adds a lot more luxury and clever thinking. The wheelhouse offers an inspired range of seating, dining and sleeping options; enough, in fact, to leave its rivals looking positively bereft. The judges were also impressed with the Activ 705 Cruiser’s value for money and the wide range of inboard and outboard power options, enabling owners to tailor the boat to suit their local cruising environment.”

The Activ 705 Cruiser won in a category of boats which the judges said “continues to surprise and inspire in equal measure, with a simply breathtaking selection of craft, ready and able to launch people into the great boating adventure”.

To win in this category, the judges stated that they were looking for the boat which:
– best entices people out on to the water
– best looks after them while they are out on the water
– offers the best combination of fun, affordability and dependability

Mark Paulhus, who leads Quicksilver’s design team said: “I am delighted that the Activ 705 Cruiser has won this award. I think the key to the strength of this new boat lies in the design concept: At the start of the development process, we established some very clear design priorities: we wanted to provide the best combination of ease of use, safety, comfort and practicality. We also wanted this Cruiser boat to carry the Quicksilver styling – those key feature lines that that characterizes the Open boats in the Activ range. We also worked hard to achieve the best possible ‘use of space’: on a boat of this size, space is a valuable asset; we have managed to create a boat with more headroom, more seating, a better galley and a better toilet solution than any product in it’s category. And recognizing that boating needs to be affordable, we were determined to design a product that would offer outstanding value”.

In fact, the design team’s objectives appear to be echoed in the recent Motor Boats Monthly test report: “Imagine being asked to create the ultimate starter boat. What would you build? We’ve given this some thought and we reckon the top priorities would be manageability, practicality, safety, and value….

The verdict from the tester was that, “As a first boat, the Activ 705 Cruiser is tailor made for putting families afloat with minimum hassle and maximum value. However, it also has enough substance and sophistication to entice seasoned day boaters looking to upgrade to a cabin boat”.