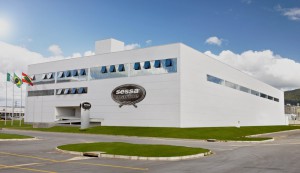 Sessa Marine Brasil – Sessa Marine Group Company – for over fifty years the leader in the European Marine Industrie, has announced – during Sao Paulo after one year from the arravil into the Brazilian market – positive sales and production result in 20011-2012 and is preparing big news for 2013, with a stronger focus towards customer relationships – an approach has always been a strength on the group.

Exciting Results
The achievement we set and get in the first year of operation in Brazil were to put in place and organize a local production capacity. At the moment we are delighted to have reached a very high quality  on the four models currently on the range for South America. From the commercial side, we have expanded our network of distributors and we have participated in national and international events, with much success. ” Said Massimo Radice President of Sessa Marine Brazil, responsible of the start-up project.

The financial results are very encouraging: “We were well received by the Brazilian market, and we are now positioned as competitors in a strong way. Since July 2011 we have produced and sold no less than 30 units here in Brazil, generating a turnover of 7 million euros. “

Massimo Radice also shows a great effort in the local industrial development through the construction of a new manufacturing facility in Palhoça in Florianopolis (SC) and the creation of a technical team based on strong exchanges with various Italian shipyards. “The exchange of technical information between Italy and Brazil, has allowed, in addition to the professional growth of the Brazilian team of Sessa, an exchange of information and experience on tropical markets useful to the improvement of European product – which at the moment is still our Group core business. Our goal is to extend this interchange activity and make it continuous so that it can contribute in a constant way to the growth of the company’s global competitiveness.”

Future plannings
The second year of Sessa in Brazil (2012-2013) will feature – as expected from the business plan, a growth of productivity potential and investments in improving customer service. Especially the after-sales and technical training to the local sales network. “During the first year we launched four boats 27, 28, 36 and 40 feet – says Massimo Radice. “This year we aim to expand production and increase sales of these products – and to produce larger models such as the C44 and F45. We also have a project to plant the production line of the Fly40, model launched in Europe in 2012 and
to present the Brazilian version since Rio Boat Show 2013 “.