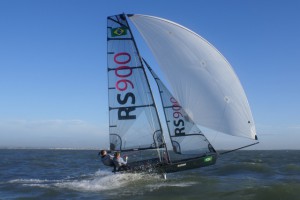 Naturally we (RS Sailing) are hugely disappointed that the RS900 has not been selected as the women’s Olympic skiff. It was recommended for selection by ISAF’s Equipment Committee who carried out the most detailed examination of all the entrants and judged it to best fit the criteria – a spectacular boat that would suit the size of sailors specified.

However, in the end the argument around the ISAF Council table focussed on the advantages of an elite skiff (RS900 or MacKay 49erFX) versus the universality offered by the 29erXX through low cost and existing distribution of the 29er hull. This focussed the voting and the MacKay won out due to its advantages of an established common platform with the men’s skiff and the fact it was liked at the trials due to its performance through being the biggest.

We at RS are proud that we met the criteria and developed an ideally suited boat that is a true credit to our own team, the suppliers involved and the RS name.

We will, of course, forever be convinced that the RS900 would have been the best boat for the women’s skiff, able to be sailed by Asian women as well as their western counterparts – affordable enough to build a wider class and develop women’s skiff sailing into a significant part of our sport. So we are genuinely sad tonight that this is not to be.

I would especially like to thank the many international sailors whose encouragement and support for the RS900 has been incredible.

We congratulate MacKay Boats on their successful selection campaign and wish the FX Class well for the future.