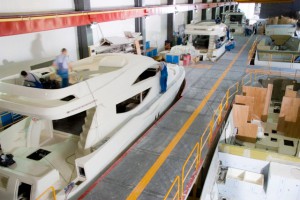 Numarine – the Turkish high performance motoryacht shipyard, with a range from 55′ – 130′ based in Istanbul – is proud to announce for this May 2012 a “new course” for the yard. The previous owner and the founder Omer Malaz is again the sole owner of the Numarine Performance Yachts.

After the joint venture with Abraaj Group, which started in August 2008, the yard acquired a very positive identity and image in the international yachting market and the target was to be a worldwide well-known brand. Abraaj added additional brand values and – as a partner – enabled Numarine to pass through the economic recession with few negative impacts. This powerful partner helped the business to continue more effectively.

For Numarine, Mr Malaz’s decision to come back as sole yard owner in 2012 will enforce business development with a worldwide expansion actions in the most important emerging markets, new management and new product launches. Omer Malaz – and his family – is one of the most famous entrepreneurs in Turkey (Malazlar Match Co, Turkey’s second largest mach manufacturer) and the financial backing is stronger than ever in this very positive moment of Turkey’s economy.

New strategies
Omer Malaz refers: “I would like to thank Abraaj Capital for all the all the support and help they had given to Numarine during a very difficult period of economical recession, continuing the development of our brand as an international and worldwide known brand even through the hardest period of our industry. Now it is our task to continue the successful plan which we had managed to implement for the past 4 years. We would like to make Numarine a World Brand. It is “Nu Numarine” time!.

Numarine for this 2012 new course is again cooperating with – the same “dream-team” of yacht designers of the calibre of Tommasso Spadolini, Can Yalman and Umberto Tagliavini (from Genoa University) – on new great yacht projects.

Marketing policies are even stronger. Mrs Pinar Coskuner Genc manages all marketing&sales matters while Ali Tanir (previously in Vicem Yachts) is the new communication adviser. The commercial strategies preview to be stronger in homeland market, South America -especially Brazil, Mexico, Venezuela and Middle East namely Lebanon and Far East with most attention in Hong Kong. The yard is planning to attend major boat shows such as Cannes, Ft.Lauderdale and Miami in addition to local but important shows in Rio, Beirut, Hong Kong and Jeddah. A worldwide advertising campaign will follow main launches of the yard during the 2012-2013.