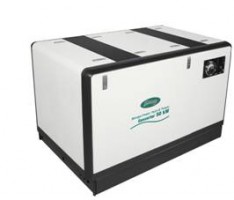 WhisperPower BV, the Dutch designer and manufacturer of smart power solutions, is preparing the supply of a 100 kW power generation system, consisting of two Genverter 50 kW variable speed generators, which will be installed in a 40 metres plus sailing yacht. In addition, a 50 kW integrated flywheel generator, also known as a shaft generator, will be supplied as an additional power source.

The WhisperPower systems are connected to a Lithium ION LiFePo4 battery, large enough to provide electrical power to the various on-board consumers during “silent time”, i.e. during the night. The Genverter generators can be put on a high or low energy mode, and will be switched off during “battery silent time”. High Power sine wave inverters take over the on-board AC power provision automatically. The battery bank can also be charged by the integrated flywheel generator during navigation.

Among the key benefits of this innovative power solution are a dramatic reduction of the ecological footprint, a substantial reduction in the fuel required to generate the hotel load, and a similar reduction in the maintenance costs for the power plant in hotel load. Redundancy is provided by dividing the power sources into four: