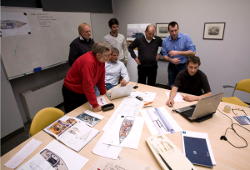 In 2004 the first Shipman 50 was launched at the Düsseldorf Boat Show where she was extremely well received by both public and press and consequently crowned as European Boat of the Year.

Her bigger sister the Shipman 63 was launched two years later and received the same honour by again being selected as European Boat of the Year at the Düsseldorf Boat Show in 2006.

Coincidence one might think, but  no, it has more to do with the concept that Shipman as a brand and product stands for.

Shipman remained true to this concept and philosophy right through the range that has since been launched and produced, being the 50, 63, 72 and 80. Thus far well over 50 units have been launched and are happily sailing around the seven seas of our globe.

The concept being the only full carbon semi-custom serial produced performance cruiser for safe but yet exciting long distance blue water cruising without any compromise on comfort, but yet offering the demanding sailor the ultimate pleasure of sailing.

Similar to all previous Shipman’s mentioned above this new Shipman 57 will symbolize the so-called third generation remaining true to the above and the following features:

–          Conceived to be a true short-handed long distance blue water performance cruiser
–          A true pilot saloon whereby the nav-station etc… are positioned with perfect exterior visibility and communication with the cockpit
–          A cockpit designed for both comfort and short-handed sailing
–          The short pilot-saloon deckhouse provides a perfect uncluttered fore-deck for safe and easy maneuvering
–          The raised interior provides easy and safe communication between cockpit nav-station and saloon – only 5 large steps between cockpit and saloon
–          And last but far from least she will symbolize the ecological hybrid and future environmental technical solution to and for blue water cruising.

More details to follow in the coming weeks and months as the development progresses towards the official planned launch yet again at the Düsseldorf Boat Show in January, 2013.

The design team is obviously yet again J&J Design and the full Seaway design team of 28 engineers and 7 different nationalities – diversity is strenght!

Additionally strengthened by Doug Petersen an absolute authority on hydro-dynamics like no other and Guillaume Verdier adding his unique experience in the French open 60’s of among others Michel Desjoyeaux.

The above team will assure a perfect state of the art engineered yacht to the latest techniques and features doing honour to this next generation of Shipmans.