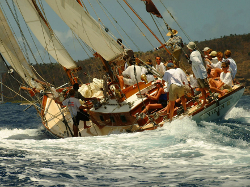 Together with Sea Independent, which is also specialised in the brokerage of yachts in the premium segment, Engel & Völkers Yachting Majorca is now offering an exceptional yacht for sale with a definite glamour factor: Built in 1915, the Herreshoff Schooner 64 sailing yacht “Vixen II” was owned for a period by the Hollywood actor Warren Beatty, who hosted such international guests on board as Madonna, Barbara Streisand, Brigitte Bardot and Maria Callas.

“Brokering such classic vessels with an interesting heritage is particularly enjoyable,” said Malte Frank, Managing Partner of Engel & Völkers Yachting Majorca. “The esteemed guests and the sense of history give the “Vixen II” a very special added touch of glamour,” Mr. Frank adds.

The “Vixen II” was commissioned under her original name “Jessica” in 1914 by Wilson Marshall, the former Chairman of the New York Yacht Club. The commission was awarded to the renowned yacht architect Nathanael Greene Herreshoff and building work was carried out at the Herreshoff shipyard in Bristol, Rhode Island/USA. The classic sailing yacht ranked amongst the New York Yacht Club “Racing Fourties” (40-foot sailing yachts), only 13 of which were ever built. Known as a rarity, the yacht has won a number of major sailing regattas, including the New York Yacht Club 40 in 1915 and most recently the Antigua Classic Race in 2001. The classic vessel underwent extensive renovation work in 2006 and is currently lying near the Dutch capital Amsterdam.

“A yacht epitomises the height of luxury and the very highest level of geographical freedom,” maintains Marcel Borgmann, Managing Director of Sea Independent. “So when it comes to a ship upon which the world’s rich and famous have walked the decks, and which has been in the ownership of famous personalities, such a vessel is sure to attract international attention,” the yachting expert Borgmann adds.

The 19-metre “Vixen II” is furnished with top-class teak and mahogany. It can accommodate five guests and two crew members in three cabins, each with their en suite bathroom. A 100 PS Perkins engine gives the “Vixen II” a maximum cruising speed of 7 knots. The offer price for the classic yacht totals 395,000 euros.

Engel & Völkers has been brokering yachts alongside prestigious properties since November 2007, making it one of the first global real estate companies to enter the yachting market. The company has a comprehensive network of shops and offices in 37 countries spread across five continents, as well as an extensive clientele reflecting the relevant target group. The Yachting business division covers a comprehensive range of service provisions including the sale, purchase and charter of luxury yachts, as well as management of construction und refitting projects and brokerage of mooring berths. Engel & Völkers Yachting is currently represented with offices in Madrid, Marbella and, since April 2010, on the island of Majorca as well.