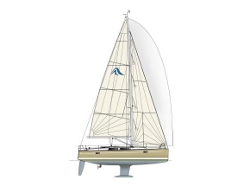 Offering a contemporary interpretation of a performance cruising yacht, the stunning new Hanse 385 is successor to the much admired 37-foot range.

The 370 series has been a tremendous success story for Hanse with well over a thousand boats launched. It also marked the start of a long and exceptional cooperation between Hanse Yachts and the design office of Judel/Vrolijk & co. Together the partners have developed many groundbreaking yacht types that have made their mark on the world market.

The many special features unveiled by the yard over the years include an integrated self-tacking jib system with a matching sail plan, high-security keel-hull connections, a modern loft-style interior, the variable Hanse Cabin Concept, and the way in which the halyards and sheets are guided to the helmsman. The new Hanse 385 is a logical development on all this and more as it builds on the success of the 445, 495 and 545 models.

Exterior and hull design
The Hanse 385 has a 20 percent higher volume than the 375 with improved sailing performance. The running deck is free of fittings while the anchor box is large enough to accommodate the fenders. The large cockpit has comfortable seating positions and there is plenty of room for a dual wheel system (standard) with a broad cross on the berthing platform. Concealed storage space for a life raft and gas bottles is also included.

Interior design
The interior concept is based on the design of the larger Loftstyle Hanse models. In addition to creating more volume and developing a contemporary furniture design, the Hanse 385 also showcases an intelligent extension of the living space. For example, the length and height of the owner’s cabin in the bow enhances freedom of movement.

The extra volume has also been invested in the head with separate shower and in a large U-shaped pantry (two-cabin version) that is sure to become a benchmark in the 38-foot class. The same applies to the lighting and ventilation system. Above the owner’s cabin are two full-size flush hatches, the side windows of the coach roof can be opened and both the galley and the head have large flush hatches and extra large cockpit windows.

Ultimately, Hanse has created a new yacht that offers more equipment, a range of fresh new ideas and details, even more sailing fun than its predecessor and all at the same price.