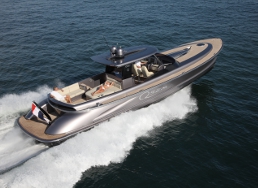 Because the Brandaris Q52 is very suitable for cruising the Mediterranean or exploring nice bays and marina’s, The Brandaris Q52 will move this month to Ibiza. She is the perfect combination of enjoying life outdoors with beautiful entourages and the possibility to spend many nights on board. Relaxed or sportive cruising are all included in this ‘Gran Turismo’. The Brandaris Q52 is a very suitable boat to discover the Mediterranean area, and is also named the Bentley under the boats because of her exclusivity, quality and comfort.

International Showboats Design Award
Much attention has been paid to the modern lines of the Brandaris Q52 with classical curves from which she distinguishes herself from all other designs like an elegant swan. The appearance, feeling, performance, luxury and detail carry this design to the highest level with a guaranteed exclusivity. The Q52 sport tender won last October 2010 the international design Award in the category sport tender, which was distributed on the domain of Donald Trump. The Brandaris Q52 was labelled by the jury as the bests in its type because the combination of the Zeus POD traction, the modern and wide sleep departures, the bar, jacuzzi and wide Estec deck. All this turned the boat into a winning combination.

Brandaris Yachts
Brandaris Yachts are a respected tender builder in the Netherlands, Loosdrecht. The origin of Brandaris Yachts started in 1989, and has been specialised in devising and building luxuriously ships of 8.5 up to 16 meters. Moreover Brandaris Yachts extended its classic product line with a sport line which includes a Q52, O52 HT and The Rib 6.70. Brandaris Yachts has in the course of years acquired a strong reputation by offering consequent quality, and distinguish themselves by its form, performance and custom-build premise.