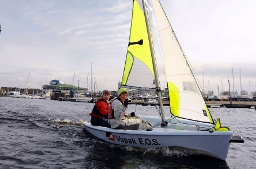 Estonian Yachting Union in cooperation with Vopak E.O.S. introduced a fleet of 18 RS Feva sailboats to Estonia, creating a completely new opportunity for children and youth to take up double handed sailing on a two person dinghy.
According to Ott Kallas, Secretary General of Estonian Yachting Union (EYU), introducing the RS Feva is amongst the most important achievements throughout the EYU history. „This double handed dinghy significantly broadens sailing opportunities for our youth. There are always sailors who are more suited for a two person dinghy compared to a one person dinghy by their personality or physical characteristics, and some sailors find sailing as part of a team more exciting,” Kallas said.
“The best part of it is that now children can start sailing on a two person dinghy at a young age, even in their very first training session, instead of having to wait to grow into the 470. I believe that besides the joy and enjoyment that RS Feva sailing will bring to our young sailors, it will also remarkably contribute to the future of Estonian professional two person dinghy sailing,” Kallas added.
RS Feva, reportedly one of the fastest growing classes in the world, is fast and athletic and enables youth to engage in team sailing irrespective of their age and previous experience. The new RS Feva boats, produced in the United Kingdom, will be divided between seven yacht clubs and sailing schools throughout Estonia – Rein Ottoson Sailing School, Kalev Yacht Club Sailing School, Tallinn Yacht Club Sailing School, Noblessner Yacht Club Sailing School, Pärnu Yacht Club Sailing School, Saaremaa Seasports Club and Haapsalu Sailing School. RS Feva will also be included in Olympic Sailing Estonian Cup which offers young sailors the chance to practice their racing skills.
In the RS Feva introduction project, EYU partnered with Vopak E.O.S., the largest and only independent oil products terminal operator in the Baltic region. Arnout D. Lugtmeijer, Vopak E.O.S. Chairman of Board, noted that Estonians as a sea nation seem to feel the call of the sea. “Sailing is important here both as a lifestyle and as a sport. To keep the traditions alive, it is necessary to work with the youth continuously. Vopak E.O.S. is very glad to be part of a project which introduces the RS Feva class to young Estonian sailors. Being a sailor myself, I know very well the excitement and challenge that sailing has to offer. It is great that young talented sailors can now feel the same on board of RS Feva boats. Vopak E.O.S. constantly supports the healthy and balanced lifestyle of young Estonians,” Lugtmeijer said.
The 18 RS Feva boats which will start sailing in Estonian waters as first weeks of May, were named after selected terminals of Royal Vopak network all over the world. Out of more than 80 terminals, the company chose 18 to become the symbolic godparents of the new boats. Some of the boats were named after closer European cities like Rotterdam, Amsterdam, Antwerpen, Göteborg, Hamburg, London. Some received their names from farther places like Houston, Durban, Sydney, Montreal, Shanghai, Singapur. Some more exotic names will truly put the geographical knowledge of young sailors to test – Fujairah, Veracruz, Algeciras, Zhangjiagang, and Kawasaki. One of the boats also carries the name of the Estonian capital – Tallinn.
The project was brought to life in cooperation of Estonian Yachting Union and Vopak E.O.S. The aim of the project is to diversify sailing opportunities for youth in Estonia, provide various sailing boats for different characteristics, strengthen the interest of youth in sailing, bring new youth to sailing sports and develop Estonian team sailing in long-term perspective.
Estonian Yachting Union is responsible for the coordination and development of sailing in Estonia. EYU unites 32 yacht clubs, sailing associations and sailing schools.
Vopak E.O.S. is the largest and the only independent oil products terminal operator in the Baltic region that provides customers with a wide range of services in the area of handling, terminalling, blending, throughput and storage of oil products. Vopak E.O.S. Ltd. operates four modern terminals – Termoil, Trendgate, Pakterminal and Stivterminal – with a total storage capacity of 1,026,000 cbm as at 31 March 2011. Vopak E.O.S. Ltd. is located in the port of Muuga, Estonia, within the Port of Tallinn on the southern shore of the Gulf of Finland. The proximity of Russia and the infrastructure of the Port of Muuga enable Vopak E.O.S. Ltd. to offer opportunities for sea transportation of oil products from Eastern Europe to Western Europe, America and Southeast Asia. The terminals are directly connected to Estonian Railways, which also gives it an access to Russian Railways. Additionally, all railway operations and logistics from the Russian-Estonian border to the terminals are managed by a wholly owned subsidiary, rail company E.R.S. Vopak E.O.S. is a joint venture of Dutch company Royal Vopak and Global Ports Investments. For more information: www.vopakeos.com
terug